5 Ways Virtualization Optimizes Your IT

Virtualization is far more than just a trend. It has moved beyond enterprise IT plans and into small- and medium-sized business offices. Thanks to the rapid evolution of virtualization technologies, it’s now possible to do more with less by increasing the efficiency of your systems, reducing the likelihood of downtime and tightening security.

At its most basic, switching to virtualization allows you to either balance computing tasks across more than one system, or consolidate several tasks to one underused piece of hardware. By freeing these workloads from individual hardware your organization can enjoy a number of benefits, such as:

Servers are powerful and expensive machines, and many of them are underutilized. Virtualization allows a single system to carry out multiple roles at the same time, such as hosting multiple virtual desktops that employees can log into from barebones workstations. These client computers are cheap and minimalistic, since the server is responsible for carrying out most of the computing workloads involved.

Virtualization offers greatly improved disaster recovery, since it allows you to keep all your computing resources in a single physical container. It’s much easier and quicker to back up a single machine than a fleet of individual workstations, and there’s a reduced margin of error. Following a disaster, virtualization platforms even allow you to automatically switch from a downed server to a virtualized backup with almost no interruption of service.

Similar to the benefits of consolidating your backup procedures, a one-machine solution also tightens up your network security. Instead of securing a couple dozen workstations, your so-called “attack surface” is reduced to a single server.

For example, when barebones workstations are used for accessing virtual desktops stored on the remote server, the workstations don’t need to store any potentially sensitive data themselves. Instead, you have only one system (i.e., the server) that needs to be protected.

With the bulk of desktop computing being delivered from a server across the network, configuring and deploying your solutions is greatly simplified. For example, if you need to replace the server, swapping in a new one (or even a purely cloud-based system) is as straightforward as copying your virtual machines.

Because of the way these systems are structured, copying your virtual machines isn’t too dissimilar from copying over any other type of file. This allows you to simplify migration processes, greatly reduce downtime, and overcome nearly every compatibility issue.

By virtualizing servers and desktops, you’ll have fewer physical machines to worry about maintaining and upgrading. Instead of wasting hours on server management and maintenance, your employees will be able to focus on more productive tasks.

In the same vein, virtualization reduces downtime, so there’s less chance of a system failure leading to your employees being unable to work. Finally, cloud-based virtualization even allows your employees to work from home or on the move, making the technology ideal for facilitating workforce mobility.

IntelligIS provides a range of data center services, including virtualized desktop experiences delivered over the cloud, and even entire turnkey computing environments for businesses wanting to enjoy the benefits of unprecedented scalability and flexibility. Call us today to learn how we can help you and your team!

Learn about IntelligIS – Watch the Video 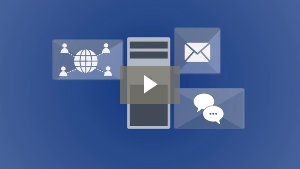